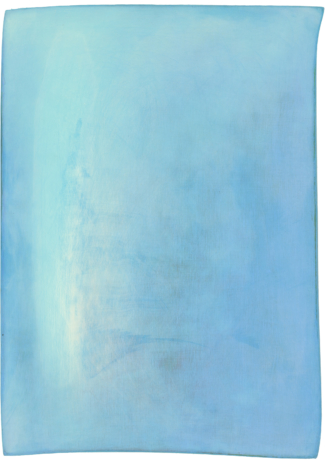 Robert Yasuda returns to David Lusk Gallery for the month of October with TRANSPARENT AND TRANSLUCENT. This body of work focuses on the visual complexity of the subtle layers within Yasuda’s paintings that encourage contemplation and focus.

This Yasuda exhibition combines luminous sculpted panels and works on paper that incorporate complexities among color fields, light, shadow, and sculptural elements. Maintaining his recognizable minimalist sensibilities, Yasuda creates paintings whose true nature are brought about by their relation to light sources. Though painted on unmoving surfaces, the works remain active and reveal changes from day to night and to viewers’ movements and ever-roving eyes.

Yasuda begins his process with a sculpted panel, often with round corners and slight, elongated indentations along the sides. He subtly modifies and prepares the panel to then cover it with very fine, thin fabric and many translucent layers of pigment. The final color is dynamic and reveals the relationship between many colors and textures and their responses to light. These depths of visible layers and modifications speak to various roles of the piece’s elements as surface, frame, and medium of experiencing the painting.

Of his work, Yasuda says, “The perception of transparent and translucent moments by the depth of their visual complexity affects viewing time as well as alterations of optical focus which may be physically felt and defined. This continually changing revelation is the mechanism of the subject matter, the metaphors being left to the viewer to determine as to what is seen and felt.”

With a long history of large-scale, site specific installations in New York City, Robert Yasuda is no stranger to all-encompassing paintings. Since the 1970s, has created works at The Clocktower and Betty Parsons Gallery, as well as MoMA PS1, The Brooklyn Anchorage, the Museum of Contemporary Art, Chicago, and the Corcoran Museum of Art. He received his BFA and MFA from the Pratt Institute and divides his time between studios in New York City and Key West. He has received a National Endowment to the Arts award, The John Hay Whitney Grant, a two purchase awards from the American Academy of Arts and Letters, and has work is in the collections of The Library of Congress, The Brooklyn Museum; Wadsworth Athenaeum, Hartford, CT; The McNay Museum, San Antonio; The Bass Museum, Miami; Carnegie Institute, Pittsburg; and others.