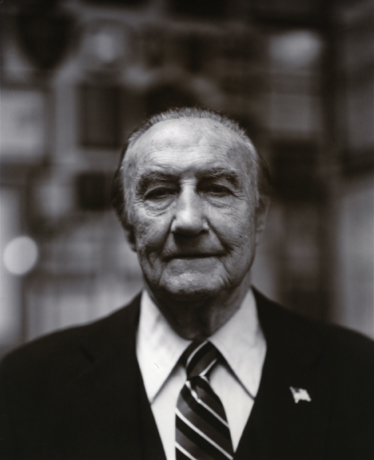 Tops Gallery is pleased to announce Portraits of the United States Congress. 1986-1987, an exhibition of 20 portraits by Judith Joy Ross. All 8-by-10 black and white contact prints, they show politicians on both sides of the aisle, presented head-on in their offices. Viewed three decades later, in the midst of one of the most surreal election cycles in American history, they communicate not the shifting ideology of the American political system, but the human experience at its core.

Judith Joy Ross (b. 1946) is one of photography's most renowned portraitists. Shooting with a tripod-mounted 8-by-10 view camera (the kind used for generations) and making contact prints, she strips photography down to its essentials: the photographer's eye and the subject's presence. Similarly, her mode has almost always been portraiture, attempting to get to the essential of her subjects, what is behind their gaze. In this, she has often been compared to August Sander and Diane Arbus, photographers who sought to categorize society, or to document the uncategorizable. Whether she is photographing adolescent swimmers, war protesters, or politicians, Ross's work is "beautiful in its transparency," as Robert Adams puts it in his seminal book Why People Photograph.

Photographing Democrats and Republicans alike with the same grace and unnerving candor, Ross has said that she made this series to "confront [her] prejudices." Though they depict a former Klansman, a repugnant segregationist, a D-Day veteran, a former professional heavyweight boxer, and the lawmaker who sponsored the Pell grant, these photographs seem to shine through the positions and accomplishments of these men and women, offering a fleeting glimpse at something so often missed by official portraiture, a candid audience with the people themselves. Attesting to photography's nonpareil ability to humanize, to link and to equalize, these works bring new meaning to the term democratic camera.

Judith Joy Ross (born 1946 in Hazelton, PA) has produced, over the course of the past 35 years, a remarkable oeuvre focusing on portraiture. In the early 1980's Ross received widespread attention for her portraits of visitors to the Vietnam Veterans Memorial. In 2012 Ross's work was given a comprehensive survey at Die Photographische Sammlun/ SK Stiftung Kultur. She has had solo exhibitions at The San Franciso Museum of Modern Art, Quadrat Bottrop, Joseph Albers Museum, and The Pennsylvania Academy of the Fine Arts. Ross has received fellowships from the John Simon Guggenheim Memorial Foundation and the National Endowment for the Arts and has won the Andrea Frank Foundation Award and the Anonymous Was a Woman Award. Her work is included in numerous museum collections including The Museum of Modern Art, NY, The Metropolitan Museum of Art, NY, The San Francisco Museum of Modern Art, The Victoria and Albert Museum, London, UK, The Sprengel Museum. Hanover, Germany and the Museum Ludwig, Cologne, German.