PERSEVERE AND RESIST: THE STRONG BLACK WOMEN OF ELIZABETH CATLETT 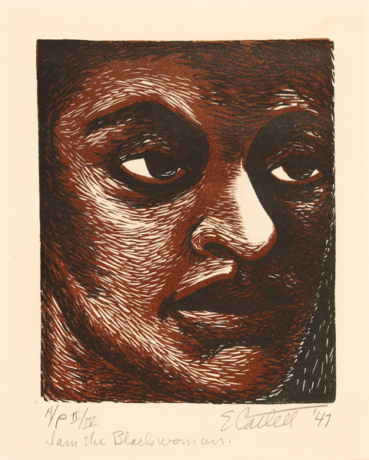 PERSEVERE AND RESIST: THE STRONG BLACK WOMEN OF ELIZABETH CATLETT

What does it mean to be a Black woman in the United States of America? This question, and its complicated answers, is central to the work of the African American and Mexican sculptor and printmaker Elizabeth Catlett (1915–2012). Informed by the contemporary concept of the “StrongBlackWoman” (SBW) trope, or stereotype, this exhibition explores the many ways in which Black women, as depicted in Catlett’s work, have overcome barriers in their public and private lives.

Born and raised in the United States and ultimately resettling in Mexico, Elizabeth Catlett spent much of her career teaching and mentoring Brown and Black youth in addition to her printmaking and sculpting practice. Throughout her life, she dedicated herself to creating empowering and varied depictions of Black women and their experiences, seen most notably The Black Woman series, exhibited in full in this gallery. Using the lens of the SBW, viewers can begin to question and challenge initial readings of and assumptions about Catlett’s Black women and Black women in society, all while considering the impact of influences such as intergenerational trauma (that which is passed from one generation to the next) and epigenetics (how one’s environment and behaviors can cause genetic changes) on Black women’s bodies and minds.

This exhibition was curated by Heather Nickels. Nickels joined the Memphis Brooks Museum of Art (MBMA) in August 2019 as the Joyce Blackmon Curatorial Fellow of African American Art and Art of the African Diaspora. Prior to arriving in Memphis, she completed a M.A. with Distinction in the History of Art from The Courtauld Institute of Art in London. Her dissertation focused on the short-lived “Little Paris Group” art collective and workshop, which was co-founded by two women, Lois Mailou Jones and Celine Tabary, in the 1940s and 1950s in Washington D.C. She graduated cum laude with a B.A in Art History from Barnard College in 2016. Her thesis explored the representation of servants and domestic workers in eighteenth-century French paintings. Ms. Nickels has worked for several American non- and for-profit arts institutions, such as the Metropolitan Museum of Art, the New Museum of Contemporary Art, The Courtauld Gallery, The Museum of Modern Art (MoMA), Sperone Westwater Gallery and Andrea Rosen Gallery. For two years, she worked as a project research associate for independent art historian Dr. Denise Murrell on the exhibition, Posing Modernity: The Black Model from Manet and Matisse to Today | Le Modèle noir, de Géricault à Matisse, which opened at the Wallach Gallery, Columbia University in 2018 and later traveled to the Musée d’Orsay in Paris.