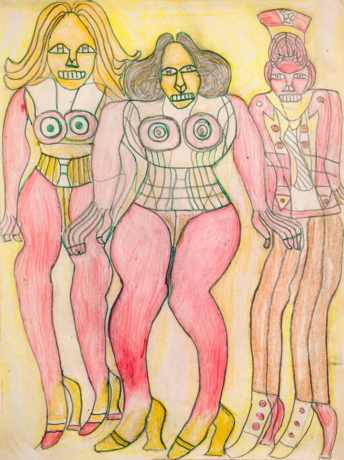 Tops Gallery is pleased to present Metafiguration, a group exhibition exploring the multifarious approaches to figuration taken by both self-taught and contemporary artists. This wide-ranging exhibition of painting, photography, and sculpture curated by artists Sean McElroy and Kevin Ford will occupy both gallery locations.

Painters in Italy got excited in the quattrocento when they figured out optical perspective because suddenly their paintings had the aura of “reality.” Before that, there were different kinds of perspective - Duccio would make you bigger if you were more important, rather than closer in space; they did that in Tibet, too. In other places like Greece they put you in a black void wrapping around a vase. In places like Egypt they stacked you on top of each other and then stacked those rows vertically to show chronology or geography. Figurative art, in this sense, was a proposal about how the world might be or could be. Allegory and mythology were built into the very structure of image-making.

Like communities themselves, figurative works are arrays of people connected over space and time. They are test strips of the societies at large that create—and, in turn, are created by—them. As European societies began to invent prisons and insurance and colonial administration and phrenology, their art began to tighten around the literal, the optical, the historical. Then they invented photography for real and painters had to figure out what to do. Some of them invented abstraction. Their metaphysical energy went into non-objectivity. Others devoted their practice to critique of mass media and the camera image. A gulf opened up between the abstract mystics and the figurative critics.

Thankfully some artists continued to tread the path of non-perspectival figurative work, keeping the way clear for us to rediscover its metaphysical potential: Jacob Lawrence, Maria Lassnig, Bob Thompson, Louise Bourgeois, Peter Saul, Kiki Smith, Kerry James Marshall, Leon Golu b, held down the fort, making work by turns theatrical, weird, political and narrative, and not especially concerned with media or camera images. The vanishing point for these artists is not optical, it is metaphysical, political, and subjective. As our whole world is tightening around representation, surveillance, and the optical regime, we’re losing the ability to access mystical and oneiric planes of reality.

This is a show of artists treading that weird weed-strewn path, working in dream states, metaphysics, and mythologies. Because maybe all these cameras aren’t showing us the whole picture. Your crush might be the child of a fox and that doorway over there might open into an astral past, and your boss might be a ghost, if you ever bothered to look up from your phone.