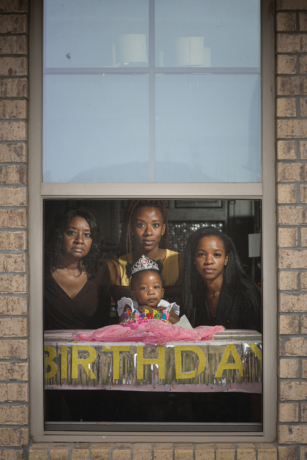 From March 13-May 31, 2020, Jamie Harmon photographed more than 2,000 people at more than 800 homes in the Greater Memphis area to document life during the quarantine period of the global Covid-19 pandemic. Through portraiture, the images document Memphis residents’ shared isolation anxieties and bonds renewed by survival, hope, and solidarity.

About Jamie Harmon:
Jamie Harmon is a Memphis-based photographer with decades of experience in documenting both found objects and human subjects through film and digital media. A visual anthropologist, Harmon’s photographs have been featured in the New York Times, CBS News, Bitter Southerner and Memphis Magazine. His latest project “Quarantine Memphis” offers an intimate, early record of life during the 2020 global pandemic through showcasing home-bound notable local figures and everyday Memphians. Through portraiture, the images document Memphis residents’ shared isolation anxieties and bonds renewed by survival, hope and solidarity. His other work includes an ongoing portable studio called “Amurica,” a renovated midcentury Airstream trailer lit with bright, whimsical props that help visitors come alive with color in the shutter. Grounded in an exploration of place from community to individual to object, Harmon’s work breathes in a sincere interest in capturing human emotion and character as story.

Artist Statement:
The Memphis Quarantine Project started on March 13, 2020, when I, along with many others, officially started distancing from one another. I thought I needed something to keep me busy but still be safe. I assumed this would only be for a few weeks and asked a friend if I could photograph them from outside their home. This led to posting an open invitation on social media, and the project quickly grew to hundreds of people. I eventually reached over 1,200 people on the sign up link before I had to put a freeze on it.

From March 13 through May 31, 2020, I photographed over 800 dwellings and 2,000 people with an average of 13 photoshoots a day, each lasting between 15 -30 minutes. Leah Keys, my partner, sorted and scheduled all 800 requests by zip code and surrounding cities in the greater Memphis area with daily efficiency routes, which made it possible to keep such a tight schedule. After the photos were taken, there was still editing and sorting to do. Generally 8 hours of shooting would lead to another 8 hours of editing. So even though the shooting stopped June 1, the editing continued every day until July.

The project was free for participants. Each home, person, or family received a private web link with edited images that they could download at no charge. Although many people donated to the project, it was never advertised as a requirement in efforts to keep participation equitable.