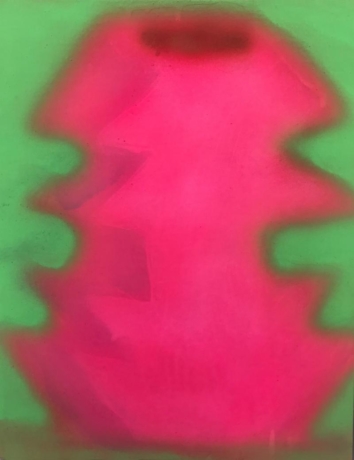 "...one never copies anything but the vision that remains of it at each moment, the image that becomes conscious. You never copy the glass on the table; you copy the residue of a vision... Each time I look at the glass, it seems to be remaking itself, that is to say, its reality becomes uncertain, because its projection in my head is uncertain, or partial. You see it as if it were disappearing, coming into view again, disappearing, coming into view again - that is to say, it really always is between being and not being. And that is what one wants to copy."
- Attributed to Cézanne by Joachim Gasquet

Tops Gallery is pleased to present Version Version, an exhibition of painting and drawing by Kevin Ford. In his second show with the gallery, Ford explores the visceral experience of perception.

The title of the exhibition refers to a moment of faulty speech recognition. Ford recounts "It's sort of nonsense, but also genius. Literally it was a misheard voice dictation. I usually make voice notes when a thought hits me while driving etc., when I went back to try to figure out what I had said, the text read version version, and I have no clue what I was actually trying to say. This mimics the way I go about painting, I originally set out to make a painting of a vase, or a portrait or something and it ends up being a foot or a finger or who knows what. It also has something to do with this David Sylvester interpretation of Giacometti in "looking at Giacometti" where he is talking about Giacometti's painting of a glass of water on a table. G doesn't try to paint the glass on the table, he paints the sensation of the perception of the vision and the memory of his perception of that glass of water on the table. A version version....."

Ford's objects (often corporeal, comical, and overlooked) are rendered as barely there-inhabiting space between a glance, observation, and memory. One object bleeds into another, mimicking the visual slippage of internal images. His paintings' soft focus simultaneously alludes to the atmospheric sfumato of Renaissance pictorial space, the narrow depth of field of photographic images, and the pixelization that occurs as one zooms in on a digital image. Ford draws on a wide range of visual traditions and histories as he explores the very immediate act of looking.

In 2018 it has become possible to see the very pores on your newscaster's face, to see what your ex is preparing to eat for dinner, to see a street view of Ulaanbaatar from a screen in your hand during your morning commute. The Enlightenment and Silicon Valley would have us believe being seen makes the world more real, but the growing consensus seems to be that everything feels totally surreal. Leonardo would remind us that part of seeing is actually not seeing.

Ford's paintings are made with an airbrush. They are soft, sfumato, to the extent that it is sometimes hard to see what they depict. But their smokiness isn't the dusky smoke from a Rennaisance fireplace, it's sour apple Juul vape. And these paintings do depict: each painting reads as a catalogue entry on a specific object or experience, seemingly chosen at random from the vast array of objects and experiences available in what we call the real world.

This documentary specificity gives the paintings a certain perceptual frustration when seen through their Juul haze. Why are you showing me this specific thing without letting me see it? Especially in 2018, when HD technology has allowed me to see the edges around Judge Judy's eyes where the foundation ends and the eye makeup begins? But there is a strange sense of utter reality in these paintings, residing in this tension between documentation and vapey illegibility.