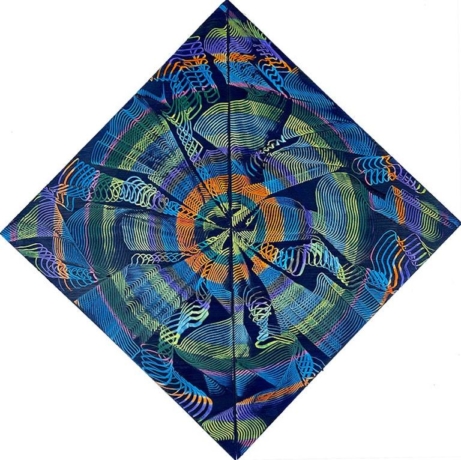 Following her solo exhibition DIVERSION in Nashville in Spring 2022, Williams returned to experimentation in the studio with shape, scale, media, and subject matter. In a way, she’s relinquishing control, something a bit challenging given the intricacies and meticulous nature of the pieces. MENDING THINGS features all new works made in succession over a period of six months as Williams revisited studio practices, developed new techniques, and expanded her mark making tools.

Of this body of work Williams says, “I’ve mostly been experimenting with tools to vary the mark-making in the oil paint layer process of the paintings. Some of them are traditionally made by letting the oil dry and the most recent ones were made with the oil paint very wet. I think the newer ones show the physicality of making them in a more light-hearted and whimsical way of moving. It’s a little like dancing to actually make them now.”

Known for large-scale tondos, Williams focuses on significantly smaller pieces in MENDING THINGS. The six-inch diameter panels compliment her installation-scale pieces, providing an opportunity to explore more refined mark-making. In many ways, the work wasn't made with an exhibition in mind, yet is still cohesive and unified through Williams’ experimentation. Organic and fresh, the pieces are emblematic of revisited or altogether new ways of working.

Kelly S. Williams received her BA in Studio Art from Vassar College and her MFA from The School of The Art Institute of Chicago. She has participated in residency programs nationally and internationally, such as the Yale Summer School for Art and Music and the Terra Foundation in Giverny, France, and has been awarded grants and awards including the WK Rose Fellowship in 2002 and the Carrell Artist Award in 2010. Her work hangs at Thompson Hotel, Nashville; nexAir Headquarters, Memphis; and the Nashville Courthouse among other collections.

David Lusk Gallery is located at 97 Tillman Street in Memphis. Gallery hours are Tu-Sa, 10-5. For more information or visuals please contact Lees Romano at 615-780-9990 or lees@davidluskgallery.com