JOSEF BULL: MAN FINDS METEORITES IN HIS YARD (THIS IS PLANET EARTH) 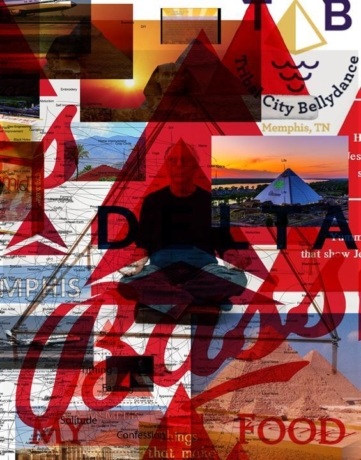 JOSEF BULL: MAN FINDS METEORITES IN HIS YARD (THIS IS PLANET EARTH)

Tops Gallery is pleased to announce Man Finds Meteorites in His Yard (This is Planet Earth), an exhibition of new works by Josef Bull at Tops Gallery and Tops at Madison Avenue Park.

Believing in meaningful coincidences and the mystical potential of all things, Josef Bull's work meditates on anomalous chains of interconnected information.

Here, in new two-and three-dimensional constellations, specific characters and phenomena from contemporary culture intermingle with objects and practices of everyday life. Corporate yoga logos unite with kindred crop circle formations; LOTR antagonist Saruman frames Bull's paintings of famed start-up garages of Silicon Valley; Danny from The Shining morphs with a real-life namesake doppelgänger whose life-saving "hunch" was noticed by local Michigan News. Layered on both photographic and sculptural surfaces, these blends of found and original materials lay out Bull's attempts to both make sense of and recreate the feeling of bewilderment induced by an evermore confounding world.

At Tops at Madison Avenue Park, Bull's video installation This is Planet Earth (2017) looks at domesticity with an astronomer's gaze. Housed within a suspended propane barbecue, a handheld video tour of a suburban yard loops to the sound of a cab-driving Youtube user's existential rant on the miracle of life. Surrounded by other icons of the American home, the piece becomes a reflection on the domestic landscape as a container for inner and outer space.

Josef Bull (b. 1984 in Huddinge, Sweden) lives and works in Brooklyn, NY.  His work has been exhibited at Bonniers Konsthall, Stockholm; Museum of Ethnography, Stockholm; Situations, New York; and Tops Gallery, Memphis. In 2013, he was a recipient of the Maria Bonnier Dahlin Foundation Award, and in 2014 was the artist-in-residence on the scientific arctic expedition Swerus-C3. His work produced onboard was recently published by Solar Power Press as a set of books titled Arctic Mud (2017).