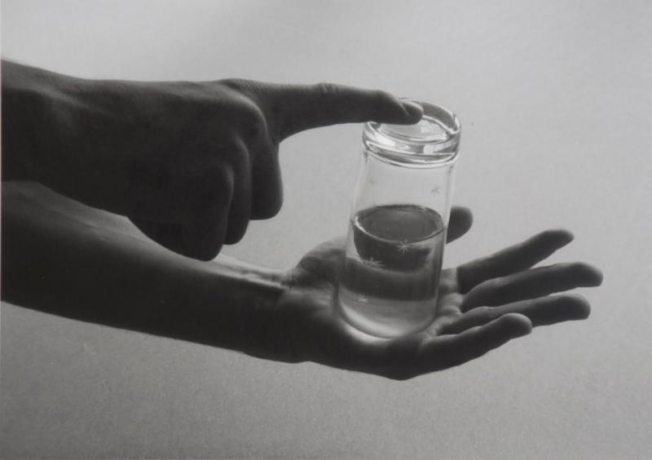 Tops Gallery is pleased to present a solo exhibition of works by Jonathan VanDyke, the New York-based artist's first showing in Memphis. In his paintings, sculptures, photographs, and performance, the idea of what a painting might be is reoriented and pushed into unforeseen directions. Each work is the result of intensive research and material processes developed over a decade.

The title The Invert recalls Freud's term for a homosexual, a now archaic reference that persisted into the 1960's. Referring to homosexuals as "inverts" signaled that their desire was bent or literally turned over, and contributed to the idea that their bodies could be righted, or fixed, if only they were "straightened out." In VanDyke's work, displacement and inversion is a given: the work and the body are oriented so as to discover new possibilities for process and encounter.

To create the large painting Blue Lines, raw canvas, laid on the studio floor, was covered with paint-dipped ropes. Two dancers, who are also a couple, rolled over these materials, pressing marks into the canvas that appear both spontaneous and calibrated. The mark-making, bodily presence, and unfinished quality of the painting is in part an homage to Cy Twombly, whom VanDyke came to know as a student in Lexington, Virginia.

Another work in the exhibition - inspired by Renaissance paintings of self-flagellating saints - was made by striking canvas with paint-soaked whips. The marked canvas was cut into pieces and sewn back together in a quilt pattern, then stretched over a framework. The whips that were used to mark this canvas re-appear in another work on view, piled up inside a cabinet-like wall sculpture made from cedar wood. A second wall sculpture, entitled Half-Life, is made from cut and sewn linen. Here, the sewn fabric is displayed in reverse, so that the viewer observes the seams and loose threads that are typically hidden from view. Embedded in the surface of Half-Life is a cast plastic sphere from which liquid paint is dripping, staining the sculpture and puddling on the floor.

For the piece Self Portrait as My Mother, as an Actress, as a Painter, as a Stranger, presented here in a new iteration, a performer shows up at the opening with paint dripping from her purse. The paint stains her dress and slowly trickles through a manhole at street level and into Tops' below-ground space, leaving behind a trail of color on the gallery walls and floor.

Jonathan VanDyke received his MFA in sculpture from Bard College. He also studied at The Skowhegan School, The University of Glasgow, and the Glasgow School of Art. His solo exhibition Some Were Caught Up, and Some Were Not, is currently on view at Loock Galerie, Berlin; he presented a solo project at NADA NYC in March. Solo exhibitions and projects have appeared internationally, including at 1/9unosunove in Rome, abc Berlin, Scaramouche in New York, Vox Populi in Philadelphia, the Albright-Knox Art Gallery, and as part of Performance 11 in New York. Performance commissions have appeared at many venues including The Power Plant, Toronto; The National Academy Museum, NY; Socrates Sculpture Park, NY; este arte, Punta del Este, Uruguay; and Storm King Art Center, NY. He serves on the faculty of both the Low Residency MFA program and the Pig Iron/Devised Performance MFA programs at The University of the Arts in Philadelphia.