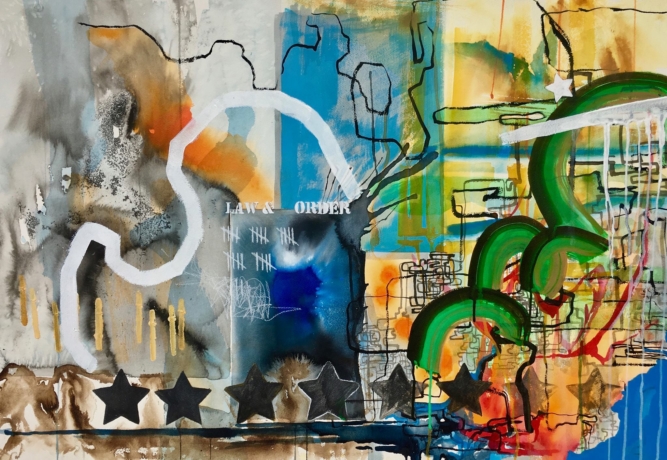 Overton Park Gallery is thrilled to present the paintings of Jamin Carter. The show, Loosies in New York opens Friday, October 5th with a reception from 6 - 8 pm and runs through November 2nd. After opening night, the gallery is accessible through Diane’s Art Gift Home Tuesday-Saturday from 11 am - 6 pm. The show is organized and curated by Nikii Richey.

In this work Jamin explores the relationship between black market economics, spirituality, and race in America. The event that encompasses these ideas is the death of Eric Garner who was known for selling loose cigarettes (loosies) in Staten Island, NY, before he was choked to death by a police officer. “What does it mean to sell ‘loosies’ in America?” is the question coloring each piece.

The narrative is created by arranging a finite selection of motifs made to represent racial identities and the institutional forces that regulate the possibilities of black people in America. To interact with it is to challenge the simplistic readings of these realities. Pieces like The Shakedown show the violent targeting of black males in the American criminal justice system integrated with the inexhaustible power of black Americans to produce culture and dignity out of oppression. Other pieces like bestillhomie evoke a more private, internal struggle between holding a religious and moral identity in an ethically compromised hustle.

What does hope look like in the midst of a marginalized and criminalized existence?

Jamin is an educator, artist, activist and minister and holds a BFA in sculpture and painting and a MAT in visual art education. As an educator he has many years of experience working as a public school teacher in several diverse classrooms with students of all ages as well as serving as a mentoring coach for art educators across the district. He currently works as a national arts integration consultant with Focus 5, leading visual art and drama based workshops in schools, museums and arts centers across the country. As an artist Jamin works in a variety of mediums such as oil painting, sculpture and mixed media. Working out of his studio in Memphis he participates in exhibitions, volunteers as a consultant for public art works, facilitates panel discussions and occasionally curates shows. Jamin spends his life with his wife Becky, son Benjamin and daughter Malea in the midtown area of the city where they garden, take walks, host neighborhood events and are usually building or fixing something.