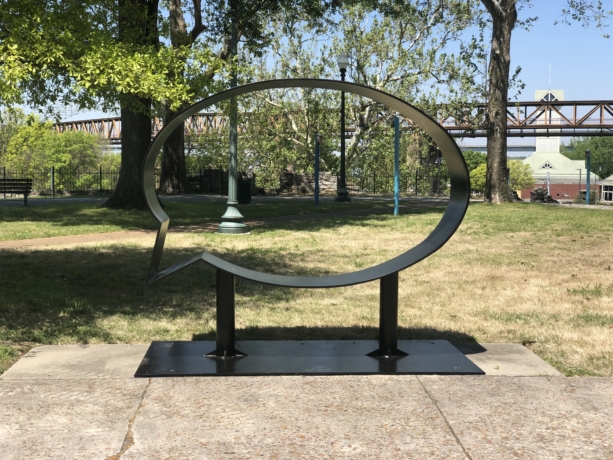 Due to the ongoing COVID-19 crisis, this project will be initially promoted through virtual means and the public is directed to the Tri-Star Arts and Memphis River Parks Partnership social media accounts for related updates.

At a future date (tentatively late Aug. 2020), the public will be invited to a celebratory reception of Hank Willis Thomas: Fourth Bluff at Fourth Bluff Park located on Front St. between Court and Jefferson, Memphis, TN 38103. When it occurs, the reception will feature a ballet repertoire by Collage Dance Collective (Memphis, TN).

Check out the sculptures via the following video links:

Hank Willis Thomas is a conceptual artist living and working in New York City. His work focuses on themes related to perspective identity, commodity, media, and popular culture. He often incorporates recognizable icons into his work, many from well-known advertising and branding campaigns. On advertising, in an interview with Time, Thomas said, “Part of advertising’s success is based on its ability to reinforce generalizations developed around race, gender and ethnicity which are generally false, but [these generalizations] can sometimes be entertaining, sometimes true, and sometimes horrifying.”

After the senseless robbery and murder of his cousin, Songha Thomas Willis in 2000, Hank became known for B®anded, a series of photographs, and Unbranded: Reflections in Black by Corporate America 1968-2008, a body of work created from appropriating advertising images. He was thinking about the root of black-on-black violence in the US. In Juxtapoz, he said, “It got down to something in the construction of black male identity. Black male identity, as we know it started with slavery in the United States, not in Africa. I’m interested in the way that black men are the most feared and revered bodies in the world in this weird way. I was trying to figure out why that was and what that was about, and the relationship to slavery and commodity, which is commerce, culture, cotton, and that body type.”

Thomas sees cultural disconnects everywhere in day-to-day living particularly as it relates to race (a figment of our imagination). In a 2013 review of Question Bridge, a collaborative transmedia project, Holland Cotter wrote in the New York Times, “…he has been particularly astute in examining the workings of what W. E. B. Du Bois called double consciousness, the condition in which people see themselves reflected, often negatively, in the view of others and end up molding their lives to confirm that view.” In this way, his work has gone beyond just making art, to examining and exposing deeper divides in our culture.

Thomas received a BFA in Photography and Africana Studies from NYU in 1998, his MFA in Photography, and an MA in Visual and Critical Studies from California College of the Arts in San Francisco in 2004. His work has been featured in several publications including 25 under 25: Up-and-Coming American Photographers (CDS, 2003), 30 Americans (RFC, 2008) as well as his monograph Pitch Blackness (Aperture, 2008). He has exhibited in galleries and museums throughout the world. Thomas' work is in numerous public collections including the Whitney Museum of American Art, The Brooklyn Museum, Museum of Modern Art, and the Solomon R. Guggenheim Museum, New York. His collaborative projects have been supported by the Tribeca Film Institute, Open Society Foundation, The Ford Foundation, and have been featured at the Sundance Film Festival. He has permanent installations at the Birmingham and Oakland International Airports, and The Oakland Museum of California, San Francisco, and two current Public Art Fund projects: Image Objects at City Hall Park, New York City; and Hank Willis Thomas: The Truth Is I See You at MetroTech Commons, Brooklyn, NY.

For 10 years, Collage Dance Collective has worked to inspire the growth and diversity of ballet by showcasing a repertoire of relevant choreography and world-class dancers representative of our community. The professional company has presented ten full-length seasons in Memphis, plus national and international touring presenting a diverse range of classical and contemporary choreography. Its institutional arm, the Collage Ballet Conservatory, trains nearly 500 kids in classical ballet throughout Memphis each year. In fall 2020, Collage is set to open a state-of-the-art facility designed to expand its programming, training and impact. The work of Collage Dance Collective has been featured in media outlets including Huffington Post, Allure, Yahoo!, The Commercial Appeal, Vibe, Afropunk and Pointe Magazine.