GREELY MYATT: BETTER THAN A STICK IN THE EYE 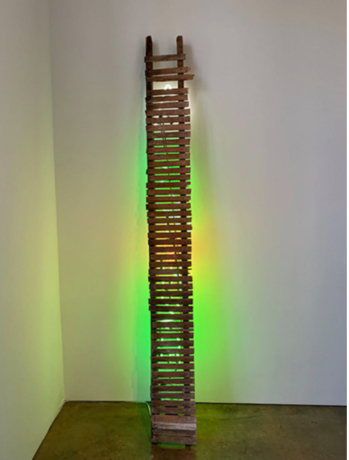 GREELY MYATT: BETTER THAN A STICK IN THE EYE

Greely Myatt is widely recognized for his whimsical sculptural objects and monumental installations made from found materials. Engaging with surrealism, pop, folk and outsider art, he has developed a compelling visual language of truly reimagined but recognizable forms. His works provoke a dialogue with the viewer around a plethora of relationships, connections, and effects among genre and style, form and content, scale and site, identity and place, time and space, art and its history, and concepts of art and craft. Myatt explores these exchanges through continuous reinterpretations of literal motifs— like the comic strip and speech bubbles— and other more conceptual frameworks. His choice of materials create initial accessibility and personal connection for the viewer. Found objects such as flooring, neon lights, metal scraps, discarded signage, and cookie tins feel familiar, but enigmatic. Elements like plants, quilts, and rugs reference his Mississippi childhood, while abstract elements such as light, air, negative space - even movement - function as tangible content. Throughout a broad diversity of works, his materials and themes play multiple roles as subject, concept, form, method and/or media. Within these intersections and re-arrangements, we experience honest conversation with seemingly infinite limits.

Greely Myatt was born in Mississippi, teaches in Memphis, and lives and works in West Memphis, AR. He received an MFA from the University of Mississippi and a BFA from Delta State University, Cleveland, MS, and is a long-time professor of art at The University of Memphis. He has exhibited in numerous solo and group exhibitions across the United States, Europe and Japan. He has received grants and fellowships from the Tennessee Arts Commission, The University of Memphis, The University of Georgia, Alternate Roots, Atlanta, and received the Mississippi Arts and Letters Visual Arts Award in 1994. In 2009, a twenty-year retrospective of his works was exhibited across Memphis in nine museum and gallery venues. His work has been reviewed in Art in America, ArtNews, Sculpture Magazine, ArtForum, Art Papers, Number, Juxtapoz and American Quilter. His work is in numerous private collections and the following public collections, including: City of Memphis; City of Portland, ME; Memphis Brooks Museum of Art; Memphis Cook Convention Center; Mississipi Museum of Art, Jackson; Tennessee State Museum, Nashville; Tennessee Brewery, Memphis; Tennessee Interstate Sculpture Project, Hartford; and Urban Art Commission, Memphis.