EZRA TESSLER: AN ANGLE TO THE PLACE I LIVE IN 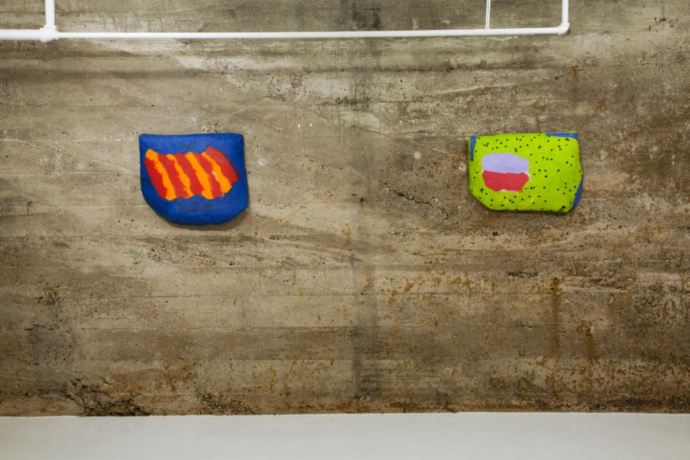 EZRA TESSLER: AN ANGLE TO THE PLACE I LIVE IN

In his newest body of work, Ezra Tessler continues an ongoing exploration that is, on its surface, about the relationship between image and object. They are paintings that are insistently sculptural: vibrant, private landscapes mapped onto jaunty, angular objects that contend with both the physical and ontological limits of the medium. But one senses a meaning beyond the image/object dichotomy, a restless echo that vibrates beneath their textured, curved surfaces. There is a certain skepticism—both of how we define painting and what a painting can or should do—that is never quite resolved. Having taught for years in prisons and conducted research and advocacy on behalf of prisoner rights, Tessler brings far-reaching ethical questions into the studio. Driven by moral quandaries – can a painting be “just”? and when is it “just” a painting? – Tessler takes nothing about his materials, or even his own intentions, for granted. Such uncertainty recalls Maurice Merleau-Ponty’s essay “Cézanne’s Doubt” (1945), in which he argued that Cézanne’s doubt in his artistic talent incited a suspicion of his own perception, which led to painting, and thus interpreting, the very process of perceiving. “Conception,” Merleau-Ponty wrote, “cannot precede execution.” Likewise, Tessler paints not to affirm a conception, but to execute states of uncertainty, or as he describes it, “to make paintings that resist closure.” These newest paintings—cast cotton pulp, wire, aqua resin, epoxy clay covered in pressed abaca paper and pigmented with exquisite, alluring hues—hold the objecthood and illusion of painting together, while leaving room to distrust their inherent contradiction. If painting can suggest ways of thinking about and being in the world, these works remind us that reality has many angles, each coexistent and none entirely resolved.

Ezra Tessler (b. Philadelphia, PA) lives and works in Brooklyn, NY. He completed his MFA in painting from Bard College in 2016 and holds previous degrees from Harvard University and Columbia University. Recent solo and two-person presentations include Recent Work with Good Weather at MECA (San Juan, PR), The Nervous Hand with Fabienne Lasserre at 315 Gallery (Brooklyn, NY), and New Proposals (with Barb Smith) at Zsona Maco (Mexico City, Mexico). Selected group shows include Home Alone at Jack Barrett Gallery (NY, NY), Walking the Cow at The Green Gallery West (Milwaukee, WI), and Materializations at The Landing (Los Angeles, CA). He has received the Jacob Javits Fellowship, the Joan Mitchell Foundation Grant, and the Pforzheimer Foundation Fellowship, and has been an artist-in-residence at the University of Tennessee at Knoxville, the Elizabeth Murray Foundation, and the Workspace Program at Dieu Donné.