DALE MCNEIL: CEASE TO EXIST, GIVE IN TO GOOD VIBES 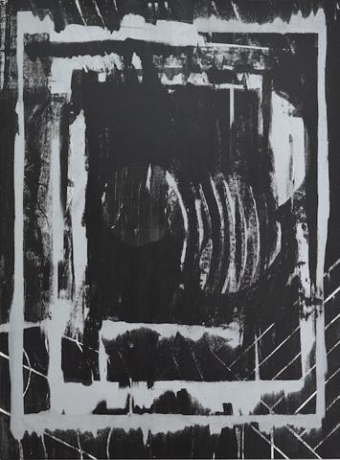 DALE MCNEIL: CEASE TO EXIST, GIVE IN TO GOOD VIBES

Tops Gallery is pleased to announce Cease To Exist, Give In to Good Vibes, an exhibition of six new paintings by Dale McNeil on view in the vitrine-like gallery space at Madison Avenue Park in Memphis.

The six paintings on view are concerned at once with accident and force as well as reflection and choice. Created within a set of parameters that allow for inaccuracy, the work uses repetition and chance to move towards singularity.

The source imagery, drawn from universal symbolism, scientific language, and the occult, is extended through iterative degrees that approach abstraction. Utilizing compositions informed by collage and a process similar to printmaking, each painting is arrived at through natural reproduction. This propagative process allows for organic growth and presents a unique version and variation of each composition.

The reduced color palette and flat pictorial space allow for focused attention on the more inscrutable qualities of the paintings. Positioned between static and active, the works embrace instability and strive to exist in a transitional state. Implied order counters evidence of accident; an image of opposing forces and ends of a spectrum joined.

Dale McNeil lived most of his life in Memphis, TN where he received a Bachelor of Fine Arts degree in painting from the Memphis College of Art. In 2016 he moved to Los Angeles, CA where he now resides. McNeil has exhibited in the United States and abroad including group exhibitions in New York and London. His last solo show with Tops Gallery was in 2015.