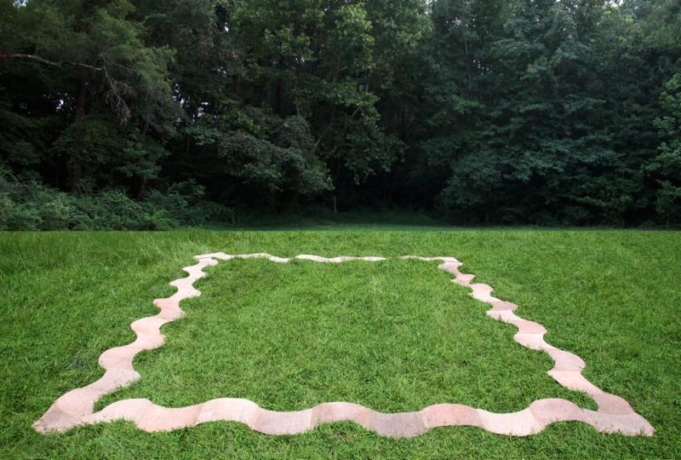 Tops Gallery presents "Presencing A Scene". Corinne Jones' second solo show at Tops utilizes the architecture of Madison Avenue Park which is divided into two parts: an outdoor above-ground 'stage' and an indoor below-ground gallery space. The gallery, which is seen through a glass wall, contains Jones' site-specific installation, "Runner for Madison Ave Park", 2017. The installation is made of remnant carpet tiles adhered to painted walls. A horizon line sets up a 'scene' that mimics the dioramic aspect of the space. The carpet tiles are fitted together into a wave-like line that frames the scene. The remnant tiles represent an index of modernist tropes. Each one has a different machine-made pattern and coloration that can be attributed to trends in art and design over time. The muted tropes are relocated and used as a framing device, upending the domestic or industrial function of the carpet. The scene is flanked by two shaped paintings, "Counterpart Sevens A + B", 2017. The paintings mirror each other, suggesting a symbolic loop. Above the gallery on an outdoor screen, a video entitled "Runner for Taylor, MS", 2017 will run on a loop at specific times. The subject of the video is a large "frame" made of carpet tiles that were found in the nearby woods and were laid out on the rural landscape. The accompanying audio recorded in the countryside enhances the semi-natural park setting.

Corinne Jones lives and works in New York City. "The Long Delayed Echo", 2011 - present, is the umbrella title for her interrelated series of work that includes paintings, interventions, video and writing. Her most recent work, "Counterpart Sevens", 2017, are seven-sided diptychs comprised of subtle equiluminant color installed crosswise from each other. Corinne Jones has exhibited solo shows in New York City, NY and Memphis, TN and has participated in various group shows including galleries and museums in Miami, FL, London, UK, and Warsaw, Poland. She earned a BFA from School of Visual Arts in 1996 and an MFA from Columbia University in 2007. Jones has taught at Columbia University and is currently teaching at The Cooper Union.