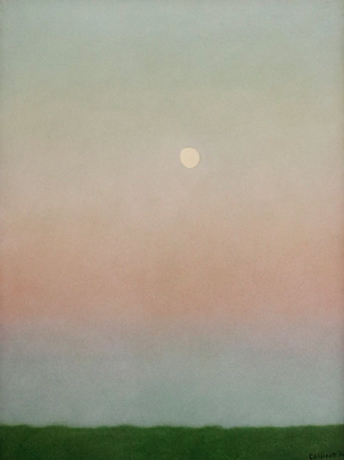 Burton Callicott led an influential career in Memphis as an accomplished artist and educator who inspired generations of creativity. His lifelong exploration of light and shadow and contemplative search for beauty is seen in transcendental paintings and drawings in a variety of styles. After his early studies in sculpture, Callicott was first interested in the representation of volume by way of figuration. This is evidenced in his well-known Hernando DeSoto murals in the Memphis Pink Palace Museum, which he completed as a Public Works of Art Project in 1933. His illustration of social and racial injustices in works like The Gleaners, shown at the New York World’s Fair in 1936, shared the social realist tone of American Scene artists like Diego Rivera and José Clemente Orozco. Callicott soon began painting the effects of light, shadow and color on natural objects as a reflection of the spiritual in nature. In his later career, the work of artists like Hans Hoffmann influenced him to explore the flat forms and perspectives of Abstract Expressionism. With this shift toward abstraction, he elevated light to subject matter in ethereal paintings of rainbows, sun and shadows. Callicott’s works reveal the essential, eternal effects of light among surface and shadow, what is seen and invisible, and the interactions of nature, the human spirit and the divine.

Born in 1907 in Terre Haute, Indiana, Burton Callicott spent much his of childhood and his seventy-year career as an artist and educator in Memphis. Callicott graduated in 1931 from the Cleveland School of Art. He was a founding member of the Memphis College of Art in 1937, where he had an influential tenure teaching sculpture, ceramics, drawing, painting and calligraphy until he was named Professor Emeritus in 1978. Callicott’s works have been exhibited at various museums across the state and region, including the Cheekwood Museum of Art and the Tennessee State Museum in Nashville, the West Tennessee Regional Art Center in Humboldt, the Knoxville Museum of Art, the Carroll Reece Museum at East Tennessee State University, the Arkansas Art Center in Little Rock and the Morris Museum of Art in Augusta, Georgia. Samples of his artwork are on permanent display at the Memphis Brooks Museum of Art and the Memphis Pink Palace Museum.