ART OF THE AFRICAN DIASPORA 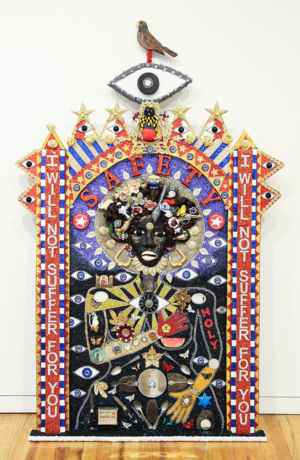 ART OF THE AFRICAN DIASPORA

Defining the definition of the African Diaspora remains a hotly debated topic There is general agreement among scholars that the term reflects the subjugation and marginalization of Black people, stemming from the involuntary movement from the Atlantic, Trans-Saharan, and Indian Ocean slave trades, while also including individuals who voluntarily migrate. It is a term that expresses a breadth of experiences, one that connects Black peoples across time, continents, and cultures, but it can also homogenize. It is a term that centers Blackness, while allowing for the “muddiness” of identity.

This display of historic and contemporary art questions and complicates this often-used term. It encourages us to reflect on how language can group us in ways that can be helpful and harmful. In some ways, language can elevate groups that have been deliberately overlooked, create new connections, and inspire conversations; in others, language can be restrictive by categorizing us into boxes without fully acknowledging or celebrating our fluid identities.

As conversations around the African Diaspora shift and evolve, so too will this display, aided by the museum actively acquiring works that reflect these varied, global experiences.