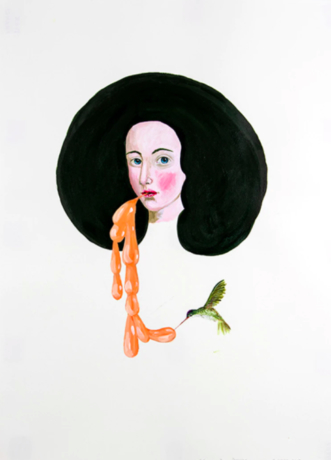 Anne Siems is known internationally for eloquent, ethereal paintings of figures and animals immersed in early European and American landscapes. Based in part on her childhood spent in the woodlands of Germany, her memory inspires the settings for her narrative paintings. At once ancient and contemporary, fantastic and real, present and post-apocalyptic, her works delve into subconscious realms as if journeys into the unknown. Examining feminine psychology and identity through history, figures of young women are Siems’ primary, recurring focal point. While their faces and hands are fully present, their bodies are cloaked in transparent, intricately woven clothes, rendered nearly invisible by patterns that overlay and obscure. In a personal response to the profound sentiments of recent Feminist movements like #metoo, Siems newest portraits depict women as almost supernatural in form, fashion and color. Untethered and unabashed, their fantastic features boldy rise from backdrops of abstracted, gestural veils.

Anne Siems was born and raised in Berlin and lives and works in Seattle. She attended the University of the South in Tennessee under a Fulbright Scholarship and completed her MFA at the Hochschule der Kunste in Berlin. Her work has been shown in a myriad of exhibitions in galleries and institutions in New York, Berlin, Chicago, Seattle, Portland, Boston, Vancouver, San Francisco and Los Angeles, among other cities. Her work can be found in collections spanning the globe, such has American Airlines, Seattle; The Arkansas Art Center, Little Rock; Boise Art Museum, Boise, ID; Harry Connick, Jr; Hallmark Collection, Kansas City, MO; Kemper Museum for Contemporary Art & Design, Kansas City, MO; Lucy Liu; Microsoft, Redmond WA; Nestle USA, Glendale, CA; Nordstrom Corporation Stores, Seattle; and Tacoma Art Museum, Tacoma, among others.