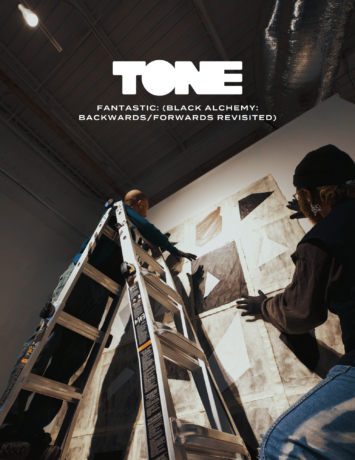 TONE invites you to the opening of Fantastic: Black Alchemy: Backwards/Forwards Revisited, a solo exhibition by photographer, Aaron Turner, that explores the depths of music through visual art.

On January 21st from 4-7 p.m., the exhibit debuts for the very first time at TONE HQ and will last until March 18th.

The title of this exhibition refers to the name of the music group Slum VIllage’s first two studio albums: Fan-Tas-Tic Volumes One & Two, but more specifically, the five tracks between the two albums; Untitled/Fantastic, Fantastic, Fantastic 2, 3, & 4.

The most notable element of Slum Village is the producer J Dilla, whose style is described by scholars and fellow musicians as micro chopping, micro rhythms, and micro time(timing), among many other similar terms.

Aaron poses the question, “how can one make or pursue the act of making visual art as impactful as music?”

We make something she can feel. We create visual art so real that it communicates beyond the constraints of space and time, and exists in the atmosphere of passion.

We make something he can feel. We create visual art so thought-provoking that it translates to each perspective individually, while being communicated to, colectively.

We create something you can experience.

So pull up to the exhibit, to experience visual art that feels like music with a lil’ music that’s so good, you can almost see it.