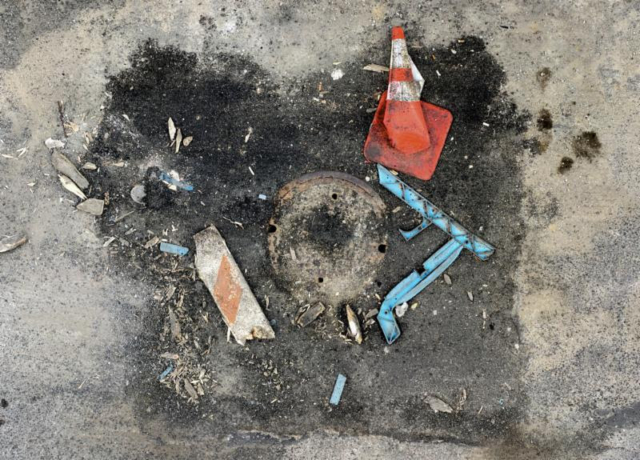 Tops Gallery is pleased to present Camera Obscura, an exhibition by Aaron Suggs.

Through subtle shifts between presence, absence, obscurity, and illumination Suggs transforms the gallery with sculpture, video, and strategic modifications to the space.

In the main gallery, Suggs presents his sculpture Untitled (Transparent Dinghy) along with a video that was recorded from inside of the sculpture as it drifted through the pond that it was installed in (as an artwork in another exhibition). The sculpture acted as a lens or filter through which the video was created. In this installation, the video now becomes the light source that is projected through the sculpture and into the gallery. The projection illuminates and activates the sculpture and in the process filters, reflects and disperses light, shadow, and image throughout the space, making the new work.

In addition, Suggs has replaced the gallery's street-level coal chute cover with a clear resin variant that acts as a lens into the gallery below. Light is able to pass through the transparent disc during the daylight hours. With a mirror placed on the angled edge of the coal chute below, the cover at street level acts as a downward periscope, transforming the subterranean space into a camera body or a diorama.

Suggs' installation in the Madison Avenue Park space engages the architecture by manipulating the physicality and volume of the gallery. The glass facade is covered in an opaque black film with two parallel lines left unmasked. Yellow gels have been placed over the interior lights. The image created on the window echoes the road and the lines on asphalt that separate lanes of traffic. As a recurring motif in Suggs' work, these markings suggest the sculptural implications of physical bodies moving through space.

Suggs' use of illumination and transparency extends across the two exhibition spaces transfiguring both image and surface by reorganizing their context and function.

Aaron Suggs was born in 1980 in Memphis, Tennessee; he currently lives and works in New York. His public sculpture was included in the Garden Centennial Exhibition at Bartow-Pell Mansion Museum in the Bronx. In 2015 he was awarded the Emerging Artist Fellowship at Socrates Sculpture Park in Long Island City, NY. He has been included in exhibitions at Kai Matsumiya Gallery, NY; and created site-specific works with Martos Gallery in Bridgehampton, NY and East Marion, NY.