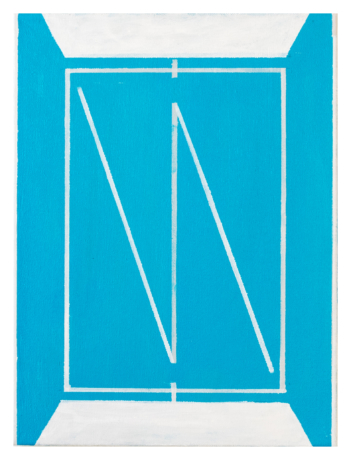 Paintings by Brian Edmonds and Alex McClurg, curated by Ashley Layendecker. Transversal explores the similarities and conversations about these two painters. Both are artists are painting geometric imagery that show some form of human error.

Brian Edmonds (b.1974) is an artist living in Alabama. His recent shows include The Lost Sea (Huntsville), DUSK: Embossed (Manhattan/Saint Chamas, FR), DO IT YOURSELF (Brooklyn), White Hours (Cyprus) and OFF THE WALL (London). Brian’s work can be found throughout North America and Europe. In 2012, Brian launched the online exhibition space Curating Contemporary. Since its inception the site has hosted over 30 exhibitions. He has also maintained the Curating Contemporary blog during this time. The blog is a source for upcoming exhibitions, studio visits, and artist's interviews. Brian’s writings and interviews can be found in the catalogue for Clayton Colvin’s Space Mountain as well as the online journal Figure/Ground Communication.

Ashley Layendecker (b. 1993) is a painter and a independent curator working in Knoxville, Tennessee. She received her BFA in Studio Art in 2016 and her MS in Teacher Education in 2017 at the University of Tennessee. Ashley works as the Assistant to the Director at Fluorescent Gallery in Knoxville and for Locate Arts out of Nashville, Tennessee where she is a contributor to The Focus.

Light food and drinks will be provided.