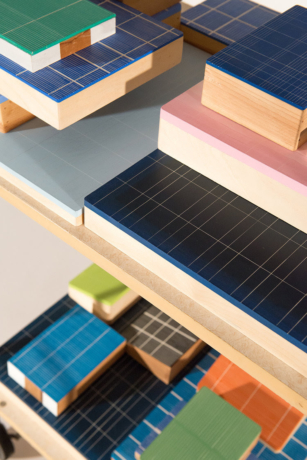 Siren Filings is about the voices of women, beautiful and dangerous, in the form of documents submitted to reveal an unseen force. The Greek mythological Sirens stand for the patriarchal trope of the female voice as alluring but dangerous, even deadly. Much like the rhyming "iron filings" that encircle and point to invisible force fields, so these drawings are responsive and revealing of forces such as labor practices, patriarchy, the voices that shape politics and identity, and those that are absent.

This show contains the work of four women. Judy Rushin's work incorporates hand woven cloth that draws attention to art making as labor, and she uses the traditionally feminine craft of weaving to reflect on the current gender pay gap. Her work is presented in context of a towel hand woven for daily use in the early 1840's by Barbara Lahr (1820 - 1903). Born 70 miles from the hometown of Karl Marx (and two years later), Lahr lived and worked in the same environment that shaped and then rejected Marx.

Tatiana Istomina's series "Philosophy of the Encounter" (in collaboration with Mona Sharma for the soft sculptures and puppets) speculates on the overlooked contributions of Hélène Rytman – the wife and murder victim of prominent French philosopher Louis Althusser -- to her husband's work. Istomina's series "Image with Caption" presents different views of the young daughter of Stalin sitting on the lap of the Lavrenty Beria- the head of the Soviet secret police. Each work focuses on a different part of the image or caption.

Mona Sharma's work for her series Manifest is disconcertingly smooth for the tensions of its content. Similarly, her travel documents adhere to familiar formal bureaucratic structures that are an uncomfortable framework for the text that pushes against it.

Tatiana Istomina is a Russian-born multi-media artist and writer living in New York. Her projects have been featured in exhibitions and screenings across the US and abroad; venues include Moscow Museum of Modern Art, Blue Star Contemporary Art Museum, the Drawing Center, the Bronx Museum, Gaîté Lyrique, and Haus der Kulturen der Welt. Istomina is a recipient of several awards including the AAF Prize for Fine Arts, Joan Mitchell Foundation grant, the Chenven Foundation grant, the Puffin Foundation grant and the Spillways Fellowship. She holds a PhD in geophysics from Yale University (2010) and MFA from Parsons New School (2011).

Judy Rushin’s work is seen by people in museums, galleries, and other alternative viewing environments across the US. Recent exhibitions include The Ringling Museum of Art, The Ulrich Museum, The Orlando Museum of Art, Alexander Brest Museum, Terrain Projects, and Flashpoint Gallery. Her projects vvvvv and Comma are in eleven collections including Vanderbilt University, University of Wisconsin, Miami University, MassArt, Baylor University, University of Washington, University of Southern California, Cal Poly University, and University of Utah. She has been featured in Burnaway, Modern Art Notes, The Washington Post, and has completed residencies at MASS MoCA, Virginia Center for the Creative Arts, and Hambidge. Rushin lives in Tallahassee where she is an Associate Professor and Director of the Graduate Program in Studio Art at Florida the State University, Co-Director of the FSU Facility for Arts Research and Founder and Curator of Comma, a serial publication of objects and words.

Mona Sharma is a first-generation Canadian artist of South Asian descent. She obtained her MFA from Concordia University in Montreal. She has received numerous grants from the Canada Council for the Arts and the Conseil des arts et lettres du Québec, and has exhibited her art in galleries across Canada and the United States.

image: Judy Rushin, Detail of Not Everything Will Be Okay But Some Things Will, c. 2015