GUBBINS: CARTOONS FROM YESTERDAY TO TOMORROW 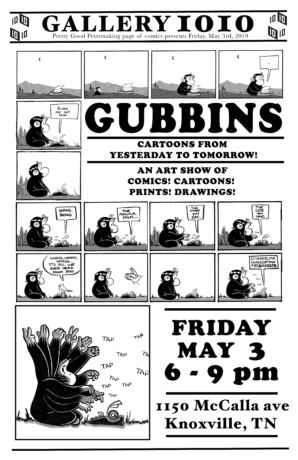 GUBBINS: CARTOONS FROM YESTERDAY TO TOMORROW

Gubbins is a comic reminiscent of classic news paper funnies. Gallery 1010’s exhibition of Gubbins: Cartoons from Yesterday to Tomorrow, is focused on illustrations and printed works of the artist, Logan Szymanowski. The walls are crowded with four panel comic strips. Each strip is self contained, like a a Sunday morning with the “Peanuts”. And each strip gives us a brief and often mundane moment with our main character, Gubbins the monkey. Gubbins wonders the countryside, with his type writer in tow and a vague destiny before him.

The idiom that if a monkey was provided a typewriter and infinite time, it would at some point type the complete works of Shakespeare, is an old one. The thought experiment popularized in the early 1900’s has taken on many renditions but they all come down to mans attempt to comprehend the magnitude of the infinite. In 1939 philosopher Jorge Luis Borges took the thought a step forward with his paper “The Total Library” in which he says “Everything would be in its blind volumes. Everything: the secret and true nature of Rome, my dreams and half-dreams at dawn on August 14, 1934, the paradoxes Berkeley invented concerning Time but didn't publish, the song the sirens sang, the complete catalog of the Library, the proof of the inaccuracy of that catalog. And the detailed history of the future. Everything: but for every sensible line or accurate fact there would be millions of meaningless cacophonies, verbal farragoes, and babblings.

Through the repetitious comic panels, we get a view of Gubbins as an entity existing outside the normal beat of time. Leaving our ape unmoved and only a witness to the play. Whether Gubbins work is poetic, observational, biblical plagiarism, Shakespearean, riffs on the shortcomings of language or simply a mash of random keys, he persistently yet quietly points the reader to something much greater than themselves. The infinite unified continuum we all belong to.