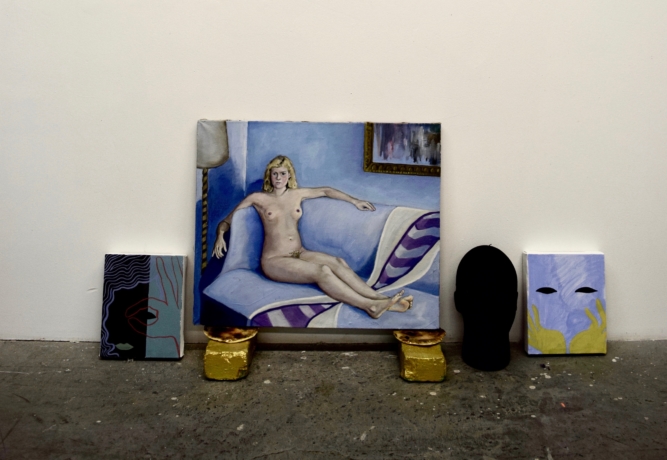 From the Known features the works of Jing Qin, Marla Sweitzer and Christian Vargas. Configured into installations, the ceramic sculptures, paintings, drawings, and found and assembled objects create groupings of integration and intersection.

Is the work into the unknown, into placing things together, forming connections and contradictions, an act of healing, a look into the artists' minds, something that can be grasped? Do these objects and their installations symbolize thoughts? Or do words within thoughts define these objects?

"'If the object were one thing, and the thought another, then there would be a double state of thought. So the object itself is just thought. Can then thought review thought? No, thought cannot review thought. As the blade of a sword cannot cut itself, as a finger-tip cannot touch itself, so a thought cannot see itself." (Sikshasamuccaya, 234. In Conze (2), p. 163, in Alan Watts, The Way of Zen)

Jing Qin (b.1989, China) received her MFA in painting and drawing from the University of Tennessee, Knoxville in 2017. Her works have been featured in New American Painting, South No.130 issue. She also was the artist in residence at the Vermont Studio Center in 2017. She currently lives and works in Knoxville.

Marla Sweitzer (b. 1989 Sarasota, FL) is a MFA candidate in painting and drawing at the University of Tennessee, Knoxville. Sweitzer received her BA in studio art from Centre College in 2011. She attended the Jerusalem Studio School’s master class in Civita Castellana, Italy in 2013, where she studied landscape painting with Israel Hershberg. In 2016 Sweitzer was a visiting artist with the Artist Immersion Program in Torre Alfina, Italy. www.marlasweitzer.com

Christian Vargas (b. Fresno, CA) is a MFA candidate in painting and drawing at the University of Tennessee, Knoxville. He is the first generation born to migrant farm laborers from Mexico. His upbringing and his exposure to the life of a farm laborer had a deep lasting effect on him, which can be seen through the cultural relevance in his work. Christian has exhibited in several traditional and non-traditional spaces including shows in Fresno, Los Angeles and Chicago. Christian worked closely with the pop-up gallery, Hide and Seek, and was artist in residence at the Fresno Art Museum through the Contemporary/Contemporáneo artist residency, sponsored by the Mexican Consulate.