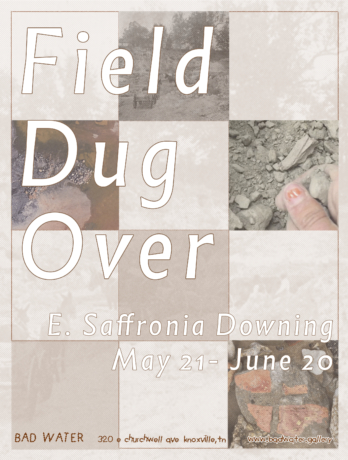 The Appalachian range is a barrier for east to west travel, with ridge lines and valleys oriented in opposition to highways and railroads. Deep grooves are cut from the faces of mountains to accommodate our movement. Driving on Interstate 40 with the windows down, I imagine my arm outstretched, grazing the dips and folds in the rock face.

In preparation for Field Dug Over, Saffronia asked me to send her photos; photos of the ground when walking around, of clay deposits, of crags and bluffs. Although the work was made between Western Massachusetts and Chicago, Illinois, careful attention has always been paid to the landscape and history of where the work would be shown. Careful attention reveals that mountains have been moving while seemingly holding still beside us.

“Fold mountains” are created where two or more of Earth’s tectonic plates are pushed together. At these colliding, compressing boundaries, rock and debris are warped and folded through a process called orogeny. In the same vein, Saffronia uses foraged clay from many sites, pressed firmly into a mold, akin to how a brick is made. Different clay bodies collide and compress. Creases and wrinkles develop then fold on top of each other. Glaze sinks into furrows and forms depressions that hold the same shine and depth as the surface of a water-filled quarry. A “fold mountain” usually displays more than one type of fold, and much like the mountains, these sculptures contain many bends and buckles. In the firing process, the once tightly pressed clay settles into a gentle slump. While this work is informed by research from documents on the history of Tennessee potters and Chicago brick makers, it is guided by movement – photos sent between places, sediment shifting, relocating to a new area, matter transported in the back of cars.

If you were to touch your hand to the face of an Appalachian mountain while on the highway at 60 miles per hour, the shale would flake, the limestone would hollow, and the sandstone would crack and crumble into smaller rocks, eventually turning to sand and mud that might press and uplift into a mountain, or maybe be scooped up into a bucket to become an object. In Field Dug Over, E. Saffronia Downing shows us that although it takes millions of years of orogenic shifting to create a mountain, there are many ways to move the earth around us.

E. Saffronia Downing works with clay to map material residue across time and place. She received her BA in Studio Art from Hampshire College and her MFA in Ceramics from School of the Art Institute of Chicago. She has exhibited nationally at numerous galleries on the East and West Coasts, and internationally in Japan. Downing has received awards and residencies such as the Ox-Bow School of Art Fellowship, ACRE Residency, and Salem Art Works Residency. She currently teaches in the Sculpture Department at the School of the Art Institute of Chicago.