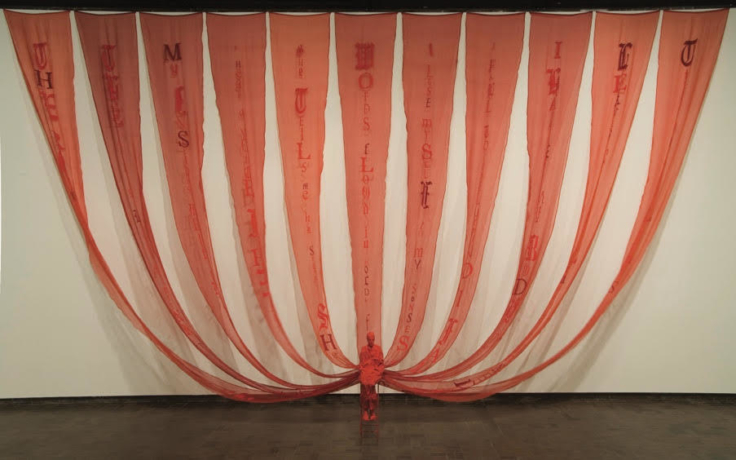 Since 2000, the Hunter Museum of American Art has prioritized the acquisition of works by women artists from around the United States, who have long lagged behind their male counterparts when it comes to museum-level recognition. Highlights of the Hunter exhibition include an installation by Lesley Dill featuring floor-to-ceiling banners and hand-embroidered text, a silhouette pop-up book by Kara Walker examining the history of American race relations, a textile by Vadis Turner questioning inherited gender roles, and a mixed media installation by Beverly Semmes inspired by composer John Cage’s minimalist music.

Like the Hunter, the Knoxville Museum of Art has actively sought to acquire outstanding works by women for its collection. The selection on view reflects women’s broad technical and aesthetic range found in contemporary art. A mixed media painting on wooden sections by Alison Moritsugu conveys a monumental landscape, expansive yet incomplete. Nancy Rubins elevates graphite drawing into a large sculptural construction apparently shaped by violent forces. British artist Marilène Oliver constructs provocative portraits of her family in the form of acrylic sheets imprinted with digital medical scans. Patty Chang uses water and mirrors to transform her own image taken in a Belgian church into a complex photographic work fragmented by harsh angles and provocative reflections. In her video Joan of Arc, Alex McQuilkin responds to Maria Falconetti’s memorable lead role in the legendary 1928 French silent film by Carl Dreyer and the film’s themes of adolescent desire, faith, and suffering. These and other selected works call overdue attention to women’s significant role in reshaping the contemporary art landscape.

According to KMA Executive Director David Butler, “The KMA celebrates East Tennessee’s rich and diverse visual legacy, which includes important women artists going back as far as the nineteenth century. We’re proud to join forces with our sister organization in Chattanooga, the Hunter Museum of American Art, to showcase the vital role played by women more recently, whether from our region or further afield.”

The Knoxville Museum of Art gratefully acknowledges the generous support of The Frank and Virginia Rogers Foundation for both exhibitions.