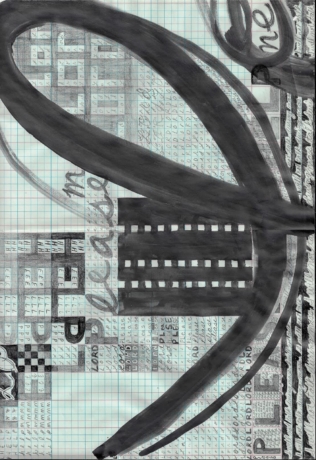 Lynne Marinelli Ghenov is an artist primarily making drawings and works on paper. She was born in Philadelphia, Pennsylvania, spent most of her life residing on the east coast and currently lives and works in Knoxville, TN. She holds a BFA in Sculpture from Tyler School of Art in Philadelphia, PA (1998). Lynne has shown nationally in various group and solo shows, including University City Arts League and Artspace Liberti in Philadelphia (PA), Tiger Strikes Asteroid and Monte Vista Projects in Los Angeles (CA), Proto Gallery in Hoboken (NJ), and Crosstown Arts in Memphis (TN). Her recent shows include a two-person show, “Collected Marks” at Carson-Newman University in Jefferson City (TN) and “Constellations,” a group exhibition at Greenville Center for Creative Arts in Greenville (SC). In 2017 Ghenov co-founded and co-directed the artist-run space C For Courtside in Knoxville. She is currently the associate at Loghaven Artist Residency in Knoxville (TN).
Website: LYNNEGHENOV.COM
Instagram: @lynnestant

Jessie Van der Laan is an interdisciplinary artist, living in Knoxville, TN. She received her B.F.A in Printmaking and Drawing from Washington University in St. Louis (2002) and her M.F.A in Studio Art from the University of Tennessee, Knoxville (2009). Her work is informed by her training as a printmaker, and a childhood spent knitting, sewing, drawing, and daydreaming. Van der Laan was raised in Denver, CO, whose landscape continues to lend form and color to her work. She is an Assistant Professor of Art at Walters State Community College in Morristown, TN. She has shown her work in numerous national and regional exhibitions. She makes her work at the Vacuum Shop Studios, a collaborative artist space, which she co-founded.
Website: jessievanderlaan.com
Instragram: @jessievdld