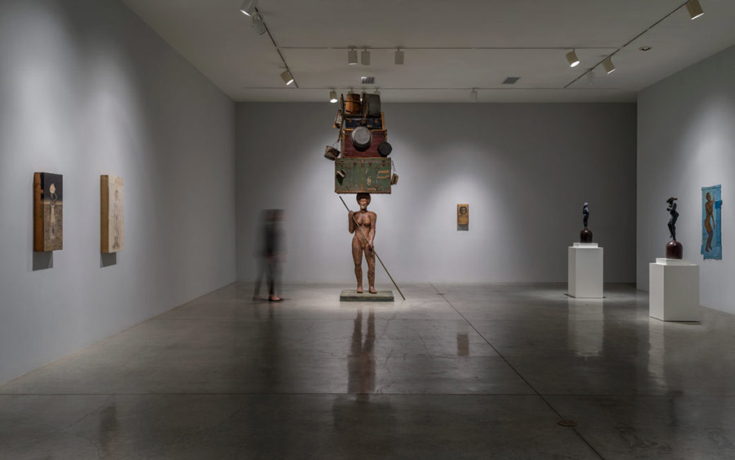 Alison Saar weaves narratives relating to the Great Mississippi Flood of 1927 into the mixed-media sculpture and paintings featured in Breach. Saar explores issues of gender, race, racism, and the African diaspora. She mines mythology, ritual, history, music, and her biracial heritage as sources for her work.

During a 2013 residency at the Joan Mitchell Center in New Orleans, Saar was dismayed to see how little had been done to rebuild African American communities devastated by Hurricane Katrina eight years earlier. Upon her return to Los Angeles, she began researching the histories of American floods and the effect on African Americans. The Great Mississippi River Flood of 1927, described as one of the worst natural river disasters in U.S. history, piqued her interest. Heavy rains resulted in the river breaching levees, creating a historic catastrophe that had a profound impact on the life of African Americans living in the Mississippi Delta. The flood exposed the conditions of poor African American sharecroppers and tenant farmers and their relationship with cotton plantation owners. The flood also resulted in social, cultural, federal policy, and political changes.

With water imagery woven throughout, Breach is the culmination of Saar’s creative research on American rivers and their historical relationship to the lives of African Americans. Through mixed media sculpture, paintings, and works on paper, she explores floods not only as natural phenomena; but also the complex interaction of social, cultural, and political factors associated with flooding and its aftermath.

Saar will also be giving a public lecture on her work on Thursday, April 6 at 7:30 PM in room 109 of the Art + Architecture Building. Please join us!