A HOLE FILLED WITH NOISE 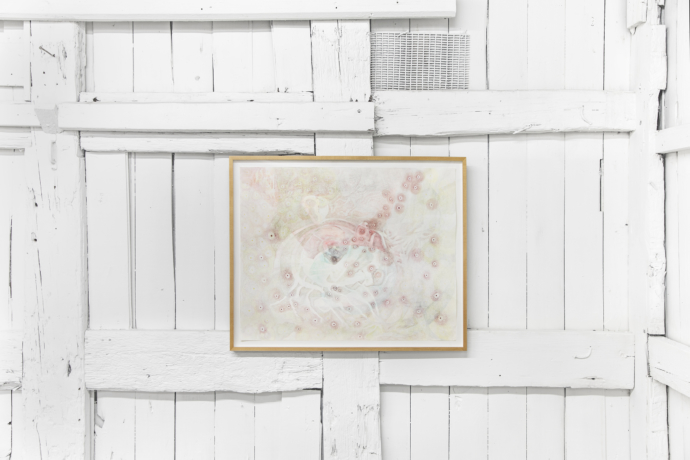 A HOLE FILLED WITH NOISE

we woke up in a sweat from a dream spent underground
the caverns we traversed were lined with pearls, or maybe they were popcorn kernels
everything glimmers from way down low
shiny, glittery soil

below the center of our collective gravity, we felt soggy
perhaps we were thirsty - sensory stimuli piercing through the barrier of REM
humidity makes for moisture and this wetness became a comfort for us all

together we made a puddle, or maybe it was a portal
we drew a circle around the empty space
a good way to exit reality is to gaze at it from far away
a good way to get out of your body is to get into another

we dipped a toe into the static

we took ourselves off, exposed nervous systems and pink particulate matter

one eyelash at a time, we opened eyes, put ourselves back on, woke up from the hole we filled with noise.

The practices of Celia Lesh and Esther Sibiude span disciplines of sculpture, drawing, writing, and music. Although their works are decidedly distinct from one another, they share an affective tenor and intuitive mode of making that honors slowness and emotionality. Esther’s drawings fluctuate between cosmic landscapes and microscopic biologies. Wisps and lines are trusted to wander, swirling in and out of reality. In some, narrative peeks through. In others, the non-drawn space, the paper and the air trapped in the frame, become equally important to the drawn. Celia makes sculptures, often from her bedroom studio. Her techniques range from sewing and soldering to chewing and mushing, arranging and re-arranging. She combines found objects with meticulous methods of adornment. The resulting works vibrate between lightness and weight, embodying the psychological. In situ, they operate like constellations, bound to one another by the heavy space in between.

Bad Water is open by appointment.