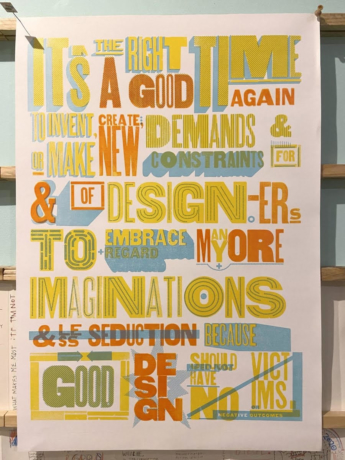 Rick Griffith is a graphic designer and master letterpress printer. His work is an erudite exploration of language, history, politics, science, music, and ethics—typographically-focused and relevant. He is known as a passionate advocate for design.

Rick was born and raised in Southeast London and immigrated to the U.S. in the late ‘80s. It was his early jobs at Washington D.C. record stores that turned him on to graphic design. It was a (short) freelance career on Madison Avenue which funded his first practice, RGD (Rick Griffith Design), and it is his love of design (and his partner Debra Johnson) which sustains the design practice MATTER, which, over the last two decades, has grown into an ambidextrous design consultancy, print shop, workshop, and retail bookstore.

An active participant in the Denver design community, Rick has served on the Board of Directors of Creative Music Works, Arthyve, and the Denver Art Museum’s Alliance for Contemporary Art. He was President of the American Institute of Graphic Arts Colorado Chapter from 1995 to 1998 and serves as an emeritus Commissioner of the Denver Commission for Cultural Affairs.

From his home in Denver or the creative atelier in Brooklyn, Rick travels the world as a visiting artist, lecturer, and educator— sharing his enthusiasm and knowledge with the next generation of designers—and contributing critical dialogue regarding graphic design as a broad discipline in the service of community and industry.

Rick’s work has been exhibited at Columbia College Center for Book, Paper, and Print, the Boulder Museum of Contemporary Art, and the Denver Art Museum. His work is represented in the permanent collections of the Denver Art Museum, the Tweed Museum of Art, and the Butler Library of Rare Books and Manuscripts at Columbia University. It has been celebrated by the Type Directors Club, Print Magazine, Dwell, and AIGA 50 Books | 50 Covers. Rick has designed and curated three exhibits on typography and letterpress printing and served as a curator and designer of exhibitions for AIGA National. He was inducted into the International Academy of Digital Arts and Sciences in 2001.

Rick’s true orientation is towards self-reliance, disruption, creative compassion, and independent thought. For most of us, life is long—for lots of reasons, we might begin to act like it.