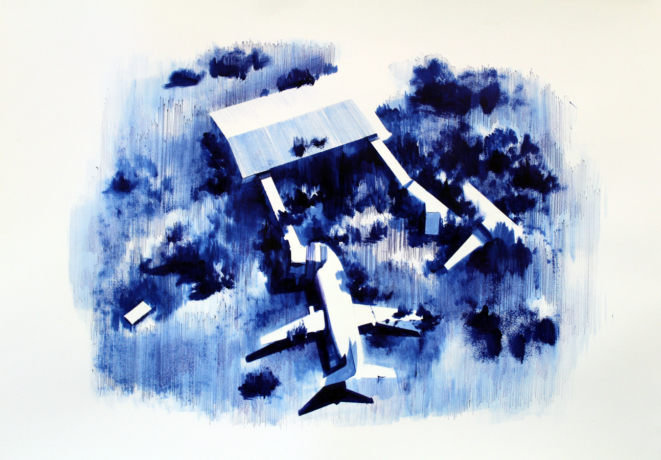 Gamaliel Rodríguez is a visual artist based in Puerto Rico. He works with felt, acrylic and ballpoint pen to produce aerial views of artificial industrial, military, and civilian structures in Puerto Rico and US territories. Memories are manipulated into dystopian, apocalyptic drawings that imagine the collapse of global infrastructure into ruin.

“I am excited to bring the hauntingly beautiful monochromatic work of Gamaliel to Austin Peay,” states Michael Dickins, Director of The New Gallery. “I was introduced to, and instantly enamored with, Gamaliel’s work a couple of years ago when a colleague at the Crisp-Ellert Museum in St. Augustine hosted an exhibition of his work. Since approaching him regarding an exhibition in The New Gallery, Hurricane Maria devastated Puerto Rico. A few months later, Gamaliel was selected to participate in a residency set up by Mass MoCA devoted to Peurto Rican artists impacted by the hurricane. The residency provided much needed time, space, financial and professional support to help artists rebuild their art practices and persue new opportunities. The work that will be prominent in this exhibition at APSU is a result of that time.”

According to Rodriguez, “The work is kind of beauty and chaos at the same time. I think this is our current situation. Puerto Rico is like that, chaos and beauty.”

Gamaliel Rodriguez received his BA from the University of Sacred Heart in San Juan PR in 2004; his MFA from the Kent Institute of Art and Design in 2005; and has participated in numerous residencies. Rodríguez’s work has been included in both solo and group exhibitions such as at SCAD Museum in Savannah, Georgia; Museo de Arte de Puerto Rico in San Juan, Puerto Rico; and Bronx Museum of the Arts in New York.

The exhibit opens Monday, February 18 at The New Gallery, located in the Art + Design building on the campus of Austin Peay State University, and runs through March 22. Ridriguez will be giving a public lecture on his work, March 13 at 6:00 p.m. in Heydel Hall located in the Art + Design building. Earlier that day, there will be a reception from 12 – 1:00p, with a gallery talk with Rodriguez beginning at 12:30. All events are free and open to the public.

For more on Gamaliel Rodriguez and his work, visit the Nathalie Karg Gallery in NYC: www.nathaliekarg.com.