CARL E. MOORE: THE REVOLUTION WILL BE TELEVISED 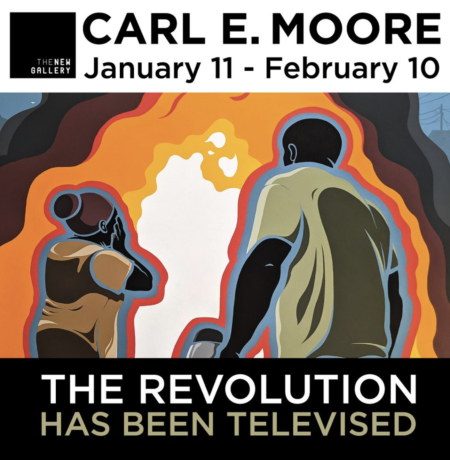 CARL E. MOORE: THE REVOLUTION WILL BE TELEVISED

Carl E. Moore's work deals with color and identity. His goal is to compare social ideologies about race, stereotypes, and belief systems to everyday colors and the perception of these colors in our environment.

"As part of my process," Moore states, "black has always been a color of identity for Black people, Black American, African American, etc., just as White, for Caucasian or those of European descent, and Brown for the South and Central American population. The color black has always been perceived as negative, so I've taken the color black and made it the narrative, and used it as part of the emotional conversation. The goal is to make the dialogue more about the artwork and less about the color of the characters, even though the characters are part of that narrative.

He uses media-based events as the primary theme of his work, reducing situations down to their most basic narrative. He uses color and content to redefine the conversation by developing a social connection between the characters and their environment. The color becomes an important part of that dialogue, and the content becomes part of the social statement.

"I consider my work to be a form of visual communication using simplicity and depth to express social and ethical issues. I want to create a conversation between both the personal and public by using color and composition to express mood, situation and ideas. By placing people and objects in common and uncommon situations, it allows me to deal with specific subjects from various perspectives."