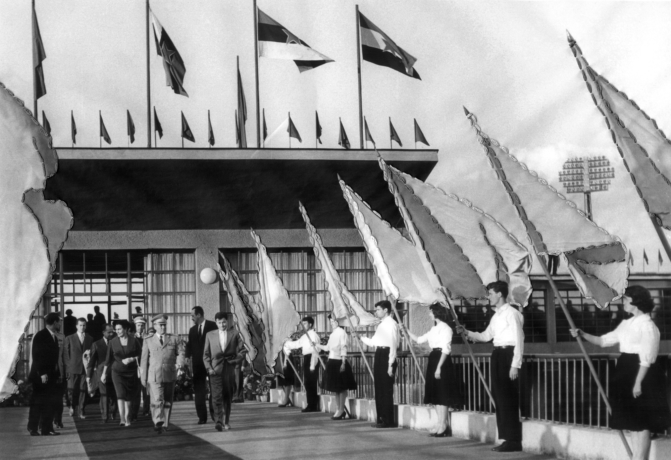 The University Art Gallery proudly presents Vesna Pavlović’s Fabrics of Socialism, on view
from August 29 – October 14, 2018. Offering “a psychological portrait of an era
burdened with photographic representation of socialist propaganda,” Pavlović invites
visitors to consider the role of photography in the fabrication and remembrance of
communal identity.

As a nine year-old growing up in the former Yugoslavia, Pavlović participated alongside
thousands of others in the spectacular and carefully recorded Youth Day celebration held in
1979 in honor of President Josip Broz Tito’s 87th birthday. Her participation is captured in a
film of the event housed in Tito’s official archive, held in the Museum of Yugoslav History
(now the Museum of Yugoslavia). Individual recollection and official state record meet in the
photographic image and in the archive, for Pavlović invoking “the friction between personal
and political narratives.”

In Fabrics of Socialism, photographs and footage of state events and celebrations -
propagandistic images of political unity from the former Yugoslavia, a country which
disintegrated into brutal sectarian violence in the early 1990s - are exposed as
manufactured. Viewers are asked to consider the photographic image as a physical object,
in the words of art historian Morna O’Neill “to think about not only what they see, but how
they see....” Photographs, and the archives in which they are housed, are fragile. They have
lives, as do the memories and official records and ideologies invested in them. For Pavlović,
“political obsolescence becomes legible as such through technological obsolescence.”
Visions of state propaganda, in all their monumentailty and performance of unity, are
revealed to be fragile, distorted and obscured by time.