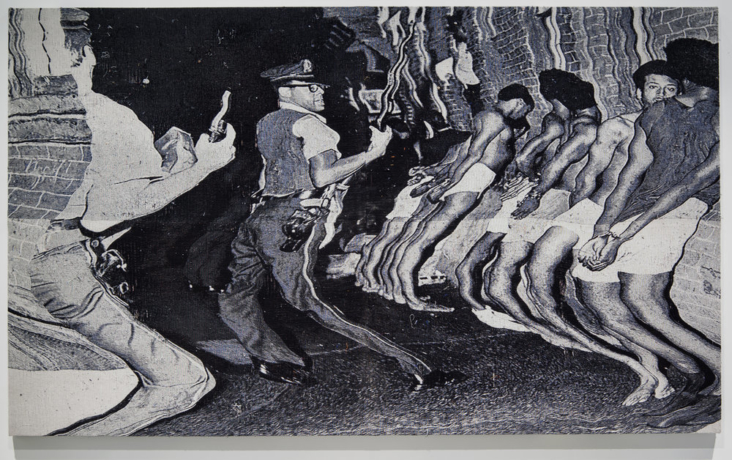 - A native of Louisville, Kentucky, Noel Anderson is known for his explorations into the evolving makeup of black male identity through the me­dium of textiles. Using found imagery from various media and archives, including television and magazine, Anderson adds, subtracts, manipulates and distorts the original pictures, which are then woven into tapestries. Anderson then re-works each tapestry, distressing, dying and sometimes dissolving the image until it is only partially legible. This literal blurring of the object metaphorically highlights issues of race and gender, as the artist attempts to dissect the distortion of black males in contemporary culture and media. This exhibition will look at a variety of recent works by Noel Anderson, from his erased Ebony pages to his woven jacquard tapestries. This exhibit is organized by the Hunter Museum of American Art.

- Noel Anderson (b.1982) is an Assistant Professor at NYU’s Art and Art Professions Department in Print Media. He holds a Bachelor of Fine Arts from Ohio Wesleyan University, a Master of Fine Arts from Indiana University in Printmaking, and a Master of Fine Arts from Yale University in Sculpture. Anderson was recently included in the Studio Museum of Harlem’s exhibition Speaking of People: Ebony, Jet, and Contemporary Art, which included an internationally published book. He held an appointment as a Visiting Lecturer at Vanderbilt University, and was also a recent Visiting Artist and Lecturer at the Ecole Nationale Superieure des Arts Decoratifs in Paris, France.