I AM NOT A CARTOON 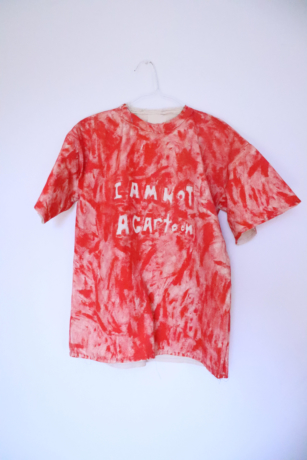 I AM NOT A CARTOON

I’m trying to get my foot into my mouth, errr I mean out of my mouth. Honestly, I don’t know where my foot is supposed to go anymore. I guess it doesn’t matter and I kinda like not knowing. It’s supposed to be attached, down there, under my ankle but I'm in pieces these days. You probably couldn’t see it anyway because it’s covered by an absurdly large, colorful, oversized shoe with an extra bulbous toe area. I picked these shoes because the only thing that brings me joy is momentarily taking them off.

Works in this exhibition are responses from a current location of chaos where cultural/personal/political events and influences ricochet as if living inside the highest level of Pong. The seemingly desperate visual calculations and language used in these works intentionally appear to necessarily and constantly reposition themselves. Next level unlocked?! Secret level of Farce.

Instances of tragedy and horror in structured systems call for the production of various lampoons, lewd writings, memes, unpronounceable baby names, and the critique of them. Moving out from a space of dejection and into an uncertain, middle space where facetiousness reigns. While piecing together this new and unfamiliar narrative, the artist becomes a character of sorts. Proof of the political being personal is revealed in the guise of the artist as character.