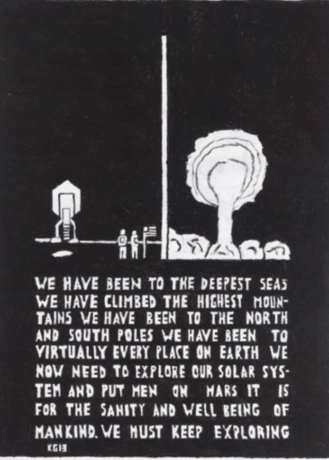 The adjectives employed to title this exhibition, “fearless” and “resilient”, refer to traits any artist should cultivate. Yet for this group of artists, their “fearlessness” of making in the face of disadvantage, and their “resilience” to strongly continue, are both remarkable and inspirational. All three fall into the realm of Outsider Art, yet each is equally accepted into the Contemporary mainstream.

Ken Grimes (b. 1947, New York City) has spent nearly five decades studying his obsession with crop circles, UFO’s, alien abductions, the paranormal, and his own experiences with synchronicity and cosmic coincidence. This led him to investigate SETI (Search for Extraterrestrial Intelligence) and Project Ozma, a 1960’s initiative that searched for electromagnetic transmissions from civilizations in far off galaxies. Grimes’ research ranges from newspaper and magazine articles to the writings of astrophysicists and astro-astronomers such as Carl Sagan and Frank D. Drake. Grimes feels that painting connects with a wide audience, yet has increasingly incorporated pure text into his work. He limits his palette to black and white, symbolic of deception and truth, providing a contrast that Grimes feels necessary to communicate in the most direct manner. Grimes’ diagrammatic images and block letter texts simultaneously project both ironic humor and compelling visionary thought about the enduring mysteries of the cosmos. Grimes was one of 30 artists included in the American Folk Art Museum’s “Self-Taught Artists of the 20th Century”, and his work is in the collections of the Milwaukee Art Museum, the Philadelphia Museum of Art, and other public and private collections world-wide. In recent years, Grimes has been a resident at Fellowship Place in New Haven, CT., a mental health and living facility that encourages intuitive artistic creativity. His work appears in the Cress courtesy of Ricco Maresca Gallery, NYC. Ken Grimes is schizophrenic.

Laura Craig McNellis (b. 1957, Nashville, TN.) has been painting since childhood. At first she painted at night, while her two sisters and family slept, on scrap newsprint her father brought home from the postal facility where he worked. Her choice of subjects, the common objects of life, dinners and birthday cakes, and the architectural spaces around her, communicate and document her own unique vision of the world. Using ordinary materials (scissors, watercolor, and tempera paint), her work has undeniably progressed through stylistic phases, as she mentally processed her experiences into visual form. The primacy of color, the attention to detail in quick renderings, and the employment of unique pictorial devices and symbols, demonstrate her intent. This exhibition in the Cress will provide a survey of the development of her work over time. The work of McNellis is included in public and private collections worldwide, and appears in the Cress courtesy of Ricco Maresca Gallery, NYC, and the Trust of Laura Craig McNellis, Mooresville, NC. Laura Craig McNellis is developmentally disabled and autistic.

Dan Miller (b. 1961, Castro Valley, CA.) is described by family as always drawing if paper and pen were available. Since 1982, Miller has worked with the Creative Growth Art Center in Oakland, CA., a pioneering institution whose mission is to foster the aesthetic development of people with disabilities in the visual arts, emphasizing the quality of the work rather than the disability. Miller employs pencil, pen, brush, paint sticks, and pastels to develop compositions of intense layers of marks, letterforms, and diagrammatic representations of simple objects, to create a captivating, rhythmic pictorial space. Dan Miller’s work has been featured in solo exhibitions at Ricco Maresca Gallery and White Columns, NYC, and Galerie Christian Berst, Paris, and at Frieze New York, the Armory Show, NYC, and NADA, Miami. His work is in the collections of the Museum of Modern Art, NYC, and the Smithsonian Museum of American Art, Washington, DC, and is currently featured at Viva Arte Viva, the 57th International Art Exhibition Venice Biennale. Dan Miller is autistic.

Roger Ricco is a gallerist, artist, and author, and co-founder of Ricco Maresca Gallery, NYC. Ricco was UTC Diane Marek Visiting Artist in 2006 (the first year of the Series) along with an exhibition of his photography “Small Events”. At the time, Ricco visited the AIM Center and the early manifestation of its visual arts program.  He visited Chattanooga again in 2009 to support the AIM Center’s arts initiative and has continued to be available informally as a consultant. Ricco’s extensive research on “outsider” artists, and artists with autism and other disabilities has resulted in his authoring and co-authoring numerous books on these subjects. A dynamic speaker, Ricco’s personal experience with the artists in this exhibition, and with others he has followed and supported, provide an amazing and captivating commentary about the springs of creativity.

The AIM Center provides education, employment, housing, wellness, and socialization opportunities for adults in recovery from serious mental illness. Since 1989, the Aim Center has helped adults be self-advocates for their mental wellness. Standing for Achievement, Independence, and Motivation, AIM Center is a non-profit mental health program with a Clubhouse approach that empowers individuals to reclaim their independence while successfully managing their mental illness to lead full and productive lives.