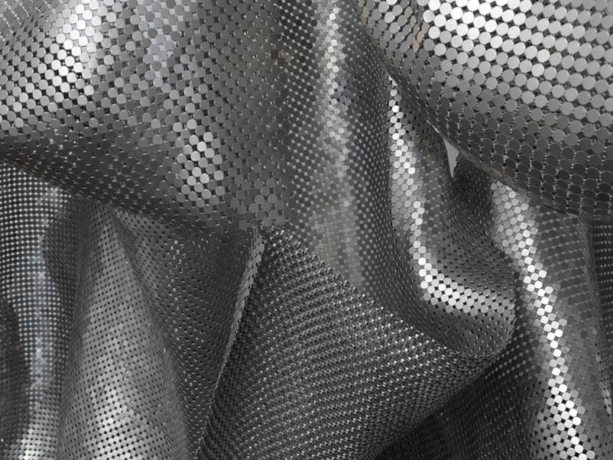 Coinciding with the completion and unveiling of her new permanent commission in early 2019, the Hunter Museum is organizing a special exhibition of works by Alyson Shotz. Un/Folding features work that explores forces of nature, folding, feminism and craft. Folding is a process that is found all over the natural world and is crucial in scientific study as well. Through a number of unique forms, Un/Folding takes a broader look at the artist’s work from the last five years. The two centerpieces of the exhibition are Lexicon, a 20 foot wall installation of folded ceramic forms, and a [yet to be titled] large, aluminum, woven sculpture that is reminiscent. The pieces in this exhibition investigate folding in space, folding with gravity, and folding as a feminist act.

ABOUT THE PERMANENT LOBBY INSTALLATION

New York-based sculptor Alyson Shotz was selected through an extensive three-year process helmed by Hunter Museum curators and approved by the museum’s Board of Trustees. A significant undertaking for the museum, the first major Hunter commission in years will hang in the cathedral-like, glass walled grand foyer of the museum’s west wing, overlooking the Tennessee River.

Working with synthetic, man-made materials such as mirrors, glass beads, acrylic lenses, thread and steel wire, Shotz painstakingly builds her sculptures combining thousands of these tiny parts into larger structures that capture and reflect light. Her works are spellbinding, changing with the daylight or as viewers interact with them, and often evoke natural phenomena, such as rain drops, ice and clouds. “The Acquisitions Committee was enamored with the alluring quality of Alyson’s work and felt the dynamic nature of her proposal would be the perfect complement to the grandeur of the foyer – beautiful, welcoming, always changing,” noted Virginia Anne Sharber, executive director of the Hunter Museum.

Like Randall Stout, architect of the Hunter’s 2005 west wing, who used the latest in computer technologies to design and engineer the museum’s roofline, Alyson Shotz uses computer mapping to create her intricately detailed works. For the Hunter commission, the artist’s computer mapping references paper: the first and most basic material an artist uses, the beginning of artistic endeavors.

"To create this sculpture based on a sheet of paper, I made a 3d model of the paper, let it fall through virtual space and used stop motion animation to grab these two shapes. I expanded the linear model of the paper (the lines that make up the model), into something that has dimension and can be built. In a sense, I’m taking a linear drawing and directly making that into a sculpture, which again alludes to the paper and the act of drawing itself…

The proposed sculpture will have a quality in between presence and absence. It will change constantly: appearing at times very substantial and full of color, and at other times and from other angles, ethereal and more subtle. The motion of the sun throughout the day, the change in light over the seasons, and even the movement of people around the space will change the appearance of this sculpture dramatically. Seen through the windows or from the water or the bridge, it will have these same qualities." - Alyson Shotz